Hello to all my fans out there!  This is Four, ruler of Animal Emergency Hospital of St. Johns County.  I have decided I need an outlet for my creative urges so I have commandeered this blog for my own satisfaction.  My fans must hear me somehow.

In order to prepare for my 1st blog post, I had a very nice grooming today.  Do you know how important regular grooming is for your pet?  Brushing releases oils in their skin ultimately helping their hair plus who doesn’t look better after a good brushing?  Regular brushing also helps cut down on hairballs in cats.  Also checking your pets ears are a great idea.  Once a week, check their ears by lifting their ears and taking a quick peek.

October is all about Halloween and what screams (pardon the pun) more about Halloween than black cats.  I wanted to give you some fun facts about the seemingly “unlucky” beautiful creatures known as black cats and the superstitions surrounding them.

The folklore surrounding black cats varies from country to country and culture to culture.  In Scotland, the arrival of a strange black cat to a home signifies prosperity.  In Celtic mythology, a fairy names the Cat Sith takes the form of a black cat.  In Asia and England, black cats are considered lucky and lady who owns a black cat will have many suitors.

When the pilgrims arrived at Plymouth Rock, they brought (along with a devout faith in the Bible) a view that anything deemed of Satan was viewed as evil.  Unfortunately, the black cat fell under this suspicion.  Anyone caught with a black cat would be severely punished.  These same beliefs led to the killing of black cats in the Middle Ages.  Midsummer bonfires were held as a large scale massacre of “satanic” cats.

However, sometimes the supernatural powers of the Black Cat were viewed as something positive.  Sailors wanted a black cat as the “ship’s cat” in order to bring good luck.  Fisherman’s wives would keep black cats at home in order to use their power to protect their husbands at sea.

In ancient Egypt, all cats were worshiped and considered sacred.  Mainly, the black cat was found to be especially sacred, which was attributed to the Egyptian cat goddess “Bast”.  Household in Egypt believed that having a black cat would increase favor with goddess and bring good fortune to the home.

Unfortunately some of the negative beliefs still exist in modern times.  Black cats have been found to have the lowest adoption rate in American animal shelters.  Some shelters even suspend black cat adoption in the month of October due to the fear of the cats being tortured, killed, or used a “live” decorations.

Please remember that cats, no matter the color, are still cats.  Cats make wonderful pets and are independent enough that you have to “earn” their adoration and affection.  It seems that they have never forgotten that at one time they were worshiped.  After all, it’s not easy being King.  Just ask Four.  He has his loyal subjects and his own personal staff.  It’s tough but he makes it look easy.

Hello from Animal Emergency Hospital of St. Johns.  How about all this rain we’ve been getting lately?  I think we may need to get Four some arm waders soon just to keep him afloat.  Although, I think he would prefer his own yacht complete with a staff to fulfill his every whim.  Oh wait!  He already has a staff for that, now he just needs a big boat.
Speaking of rain…do you know who else loves these damp conditions?  Mosquitoes!  Those nasty little bloodsuckers are prominent in our area and this rain can make their population skyrocket.  Not only do these bugs cause itchy bites, they can also carry and spread heartworms in our beloved pets.  The mosquito has the starring role in the heartworm life cycle.
Adult female heartworms live in an infected dog and produce microscopic baby worms called microfilaria.  These microfilarias circulate in the bloodstream and when mosquito will take a blood meal from the infected dog, the mosquito becomes a carrier.   These baby worms will then develop into larvae over a period of 10 to 14 days.  When the infected mosquito bites another dog, the larvae are deposited on the animal’s skin and enter the new host through the mosquito bite.  Once inside the host, the microfilaria can mature into adult heartworms within the animal’s heart in about 6 months.  Once mature, heartworms can live for 5-7 years in dogs.
What are the symptoms of heartworm disease?  Many dogs show little to no symptoms in the early stages of heartworm disease.  The longer the infection goes on, the more likely symptoms will develop.  Signs and symptoms may include a mild persistent cough, fatigue after exercise, decreased appetite, and weight loss.  As the disease progresses, more serious symptoms may present such as heart failure and the appearance of a swollen abdomen due to excess fluid.   In serious cases, symptoms include labored breathing, pale gums, dark bloody urine, and death.
So what can you do to combat this deadly disease?  You can try eradicating mosquitoes from all of the great state of Florida.  Or you can treat your pet with a monthly heartworm preventative.  With a prescription for heartworm prevention you can help prevent your pet from ever experiences the symptoms of heartworm disease.   Heartworm preventions works by killing the microfilaria.  Heartworms must be eliminated before reaching the adult stage so we recommend a monthly preventive that can be either topical (Advantage Multi) or oral (Interceptor or Iverhart).
We recommend yearly heartworm blood tests and monthly preventative in order to eliminate heartworms and keep your pet healthy and happy.  We gladly stock Advantage Multi which is a topical heartworm prevention that also kills adult fleas, treat and controls roundworms, hookworms, and whipworms, and also treats sarcoptic mange.  We also have oral Interceptor and Iverhart which prevent heartworm disease and treats roundworms and hookworms.   If you have questions about what preventative would work for you and your pet, please feel free to call us at (904)794-5071.

What breed of dog makes the most ideal pet for your family?  A shelter dog of course!  There are hundreds upon thousands of homeless dogs in shelters around the world right now who are looking for homes and loving families.  October is the best time to adopt a new friend.  Working in the veterinary medicine world, you get to meet a lot of the lucky ones who find their forever home.  Even some of our own have adopted their fur babies.

Speaking of homeless pets looking for a forever home.  We have a very handsome bulldog named Charlie that is currently looking for a loving home.  Charlie had a rough start in life, but he’s a survivor.  He’s a big sweetheart that has a lot of love to give to the right family.  If you’re interested in our handsome Charles, please feel free to give us a call.  We’d love for you to meet this big hearted fellow.

This is Charlie enjoying his first ever “Bulldog Birthday Party!”

To quote Bob Barker from the Price is Right: “Please remember to spay or neuter your pets.”

If you’re lonely and looking for that special four legged friend, seek out a shelter to help find a wonderful pet.  You won’t regret it.  I speak from experience!

First day of September gives us sunshine and found Four very busy supervising our technicians as they checked in a shipment of supplies.  Being inventory manager is a tough job but Four makes it look easy as he watches over and makes sure the order is complete and correct.  He’s such a thorough and responsible supervisor.

Heartworms are transmitted by mosquitoes year round.  Florida is an excellent breeding ground for mosquitoes with its humid weather.  More mosquitoes = more cases of heartworms.  Heartworms can affect pets outdoors AND indoors!  They do not discriminate!  Interceptor also protects your pets from intestinal worms, such as hookworms, whipworms, and roundworms.  Protect your pet today from these nasty little critters.

Our other great rebate offer this month deals with those nasty little creatures that we all hate.  FLEAS!  Fleas cause itching, rashes, and make our lives and our pets lives miserable.  Pets can be exposed to fleas anywhere, from your backyard, on walks, or even in your home.  One female flea can lay up to 50 eggs in a day which can lead to a major infestation quickly.  Fleas can cause Flea Allergy Dermatitis (also known as FAD) which cause severe discomfort in your pet.  Severe infestations can also cause anemia.  These little blood suckers are also the source of tapeworms in your pet’s intestinal tract.

We offer Comfortis to help combat these horrible critters in our never ending war on  fleas.  Comfortis is a flavored tablet that offers month long protection that is fast, effective, family friendly, convenient, and safe.  Comfortis kills fleas BEFORE they lays eggs!!!  Right now if you buy 12 months of Comfortis, you can get a rebate of $25 on your purchase.  Buying 6 months of Comfortis gets you a rebate of $15 on your purpose.  Very good deal!!!  THIS PRODUCT IS FOUR APPROVED!!! (And Vet approved as well.)  J 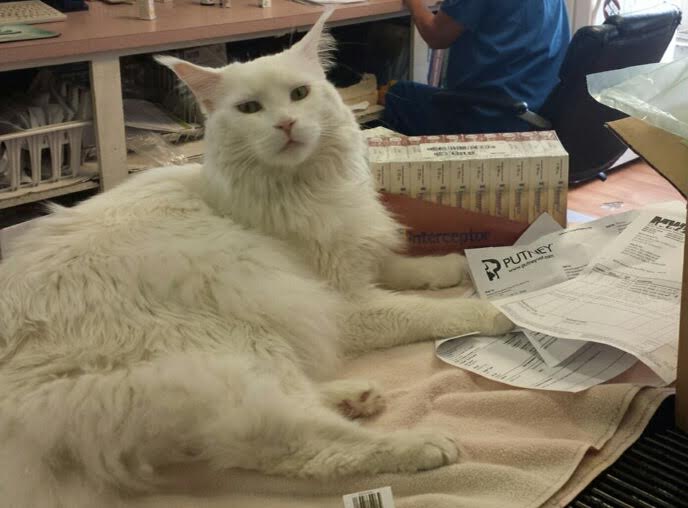